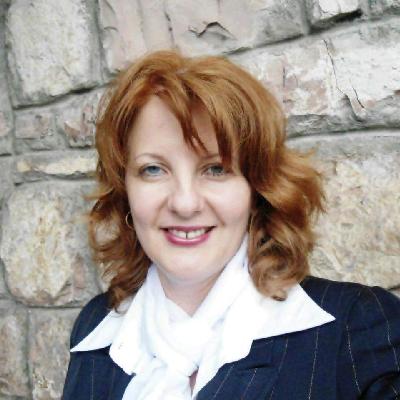 
She completed her elementary and high school education in Bosanska Krupa. Studying mathematics in the Faculty of Science of the University in Zagreb, she moved on and graduated physics in Banjaluka (Faculty of Science, Department of Physics, graduate thesis on the Doppler's effect.) During the war in Bosnia and Herzegovina, she was working in several „war schools“ to which she had to walk miles to. According to her own words, it accustomed her to writing in a small font, in order to lower the costs of buying notebooks and pencils (that were very hard to find in the wartime.) By the end of the war, she managed to escape to the territory of the Republic of Croatia, where she started to volunteer in the extraterritorial school „Marne“, with the purpose of admitting and educating Bosnia and Herzegovina's children-refugees in Croatia. Those were the experiences through which she had realized that being a teacher is a state of mind and a lifestyle, that is founded on the love towards children, on endless patience, perseverance, commitment, optimism and creativity. Her favorite quote of Antoine de Exupéry is: „All grown-ups were once children... but only few of them remember it.“ That „remembrance“ is actually a form of understanding children's needs, but also doubts, wishes and dreams. Through her classes, Amna primarily incites students' love towards nature, the environmentalism that leads them to a greater understanding of the physical laws that govern the universe.Her students eagerly await her experimental classes, that never fail to turn her classroom into a real, little „academy of science“. Seminar-workshop: “Service Teacher Training Workshop” organized by the USAID (ABEL2, by Creative Associates International, Inc.), Stubicke Toplice 1995 Through which I certified for: The Brainstorm method of creative thinking, the Tyler's model of curriculum development, the issues concerning school discipline, Dale's cone of experience, the prevention and battle with child wartime PTSP, Ellis' ABC model, Cog's model of group development, Giraffe's classroom. Other workshops and seminars include: “Youth Health Education”, The Soros Foundation, Fund “Open Society”, 1998 (certified for the prevention of eating disorders, abuse of alcohol, tobacco and other narcotics, but also for the prevention of AIDS) “Competence of teachers for inclusive approaches” Pedagogical Institute Bihac, 4.06.2010. “Contemporary upbringing- the evaluation and grading of students” Pedagogical Institute Bihac “Physics in education, topics of modern physics”, A seminar for physics teachers in Fojnica for two years: 22-25. January 2005 and 22-24. January 2009. “Microsoft Partner in Learning, Innovative Education Forum”, 2001, Sarajevo (the finale of the competition: “Innovative use of IT in teaching”). “Modern trends of teaching natural sciences – data logging” in the United World College Mostar, 2010. I am also a member of the Association of Physicists in the Federation of Bosnia and Herzegovina. I am a certified attendant of the “School for Building Peace”, a project organized by USAID and the Catholic Relief Services of Bosnia and Herzegovina that provided me with a firsthand theoretical and practical education on building peace. It consisted of the following courses: 1) Culture of peace 2) Media and Peace 3) Peace and Social Movements 4) Education for Peace 5) Religion’s Role in Building Peace 6) Building Peace and Transforming Conflict As part of the project activities, I was obliged to write an essay on one of the aforementioned course themes. I chose an essay on the theme of Religion's Role in Building Peace Conference “The School I Love”, 2012, Sarajevo My paper “How to survive a parent meeting” was published in the “Records” of “The School I Love”. The “Records” were the results of a project “Multidisciplinary Society for the Bettering of Mental and Social Health” in cooperation with the proMENTE social research, the Youth Initiative for Human Rights Bosnia and Herzegovina and the Center for Human Rights. The call for applications was sent out to 294 high schools, but the Records accepted only 30 papers, that included the full version of “How to survive a parent meeting”. The paper presents parent survey results, whose goal had been to improve the communication between parent, student and teacher